Caverns of Khron was released ten years ago today. It both does and doesn’t feel like it’s been ten years. This was my first quote-unquote “major” video game development project, and I worked on it for almost a full year. Since 2012, I’ve learned a whole lot about game development, design, and coding, but this was an important step. And the world of indie games, including the solo/hobbyist development scene, has changed immensely since then (itch.io wasn't even around yet!). I'm also in a wildly different place in my life (I released the game while I was an exchange student in Tokyo).

At the time I made it, it felt like everything I was making the “real” video game I’d been wanting to make as a child, which accounts for all the influences explicitly reflected in the design—it started as a reworking of the core mechanical ideas in Monuments of Mars. This is where I really started to figure out level design and how to build screens that work with a game’s mechanics in an interesting and compelling way.

Last year, in between other projects, I finally went back and reworked some sprites that I had long been unsatisfied with. A small set of cosmetic changes, but it felt good to put a cap on this milestone project. I’d thought about saving that for this tenth anniversary, but figured it would be best to get the best version of the game out sooner rather than later (incidentally, I uploaded it the morning of January 6, 2021—uh, so that’s where I was that day).

The game also features lovely environment art by Michael Santiago and excellent music from WiL Whitlark. One of the few true collaborations I’ve done, and I’m still quite proud of it. 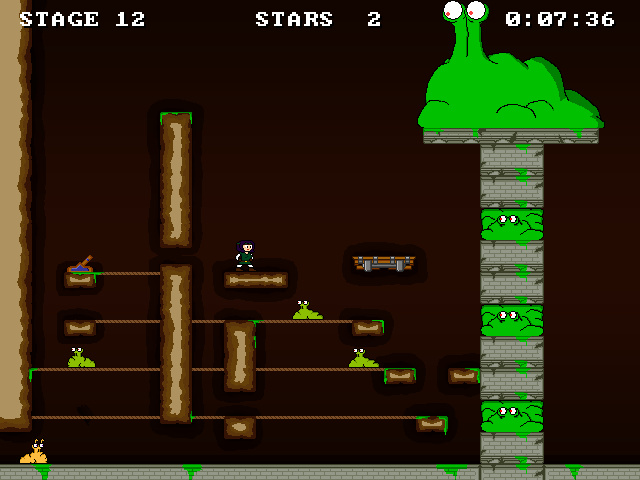 Classic platforming action that intensifies the deeper you go